Holiday Cheer Chai Black Tea Blend is a spicy Christmas morning tea that warms you from head to toe. We handcraft our artisan teas from the finest ingredients sourced worldwide. Each component is carefully selected from growers that care about the environment and blended in small batches in America.

Handcrafted teas from Ohio. Brew our teas hot or cold.  Each container includes steep time, serving size, and ingredients. Also, view all of The Welsh Hills Inn’s artisan, loose-leaf teas at this link.

Holiday Cheer Chai Black Tea Blend is a spicy Christmas morning tea that warms you from head to toe. It is part of the Elephant Approved® line of teas and accessories. We handcraft our artisan teas from the finest ingredients sourced worldwide. Each component is carefully selected from growers that care about the environment and blended in small batches in America.

Handcrafted teas from Ohio. Brew them hot or cold.  Each container includes steep time, serving size, and ingredients. Also, view all of The Welsh Hills Inn’s artisan, loose-leaf teas at this link.

You would have to drink three cups of chai tea to achieve the same amount of caffeine you get in a single cup of coffee. And this ratio increases to 5:1 or 6:1 when you compare chai to strong coffee. By this fact alone, switching to chai will cut your caffeine intake dramatically, even if you have an extra cup. Finally, we have a comfortable and enjoyable way to get off the stimulant/fatigue treadmill and enjoy something good for us. Let’s drink a cup or two to our Holiday Cheer Chai Black Tea Blend!

Unlike coffee, chai has many inherently beneficial properties. The black tea in chai is rich in antioxidants, and the spices in chai have been used for thousands of years to promote general health and well-being and treat various ailments.

According to Ayurvedic (Ancient Indian) philosophy and medicine, these spices are considered “sattvic,” or calming, vitalizing, and mentally clarifying – The perfect antidote to the stresses of modern life! Consider these traditional uses:

Cinnamon increases circulation, opens breathing, increases awareness/vitality, and reduces fatigue. It is also reputed to be an aphrodisiac!

Cinnamomum aromaticum is native to China. It has been used there extensively for thousands of years in traditional Chinese medicine. It may balance the spleen, kidney, heart, and liver meridians and stimulate circulation and the movement of ‘chi’ or energy. In Ayurveda, the traditional Indian healing system, cassia supports the respiratory, digestive, nervous, circulatory, urinary, and reproductive systems. So, raise your cups to the movement of chi with our Holiday Cheer Chai Black Tea Blend. 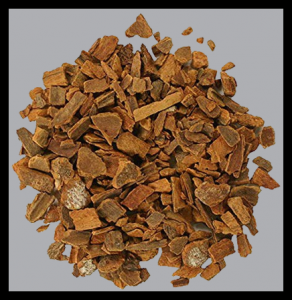 Native to Indonesia’s spice islands, cloves have been used by the Chinese since 300 BC and came to Europe in the 4th and 5th Centuries AD. Cloves have pain-relieving and antiseptic attributes. In addition, clove is used to increase the potency of other herbal blends.

Chinese star anise is steeped in water to make a tea used to treat respiratory infections, nausea, constipation, and other digestive issues.

Long valued as a stimulant for the circulatory and immune systems and used to treat impotence and motion sickness.

The Story of Chai and Its Benefits – from WebMD

Green tea receives a lot of praise for its high antioxidant content, but it isn’t the only hot beverage that offers a significant boost to physical and mental health. Not only does chai tea provide many of the benefits associated with green tea, but it also has a bold flavor and enticing aroma that few people can resist.

Chai has a long history as a beloved beverage. The name means “tea,” derived from the Chinese word “cha.” But chai wasn’t always associated with black tea. Initially made entirely of spices, they didn’t include any tea until India’s British colonization.

Indian lore suggests that chai originated in a royal court thousands of years ago. Accounts of this court’s location vary from India to Thailand. Regardless of its original location, chai has always been extremely versatile, with preferred spices and preparation methods ranging dramatically from one region to the next.

Chai tea is an excellent source of antioxidants such as catechins and theaflavins. These fight oxidative stress and can play a role in preventing cancer and other conditions. Depending on the preparation, chai tea may also include calcium, manganese, potassium, and Vitamin K. A cup of unsweetened chai tea brewed with water contains zero of the following – calories, protein, fat carbs, fiber, or sugar.

Chai tea can provide various noteworthy health benefits. These benefits depend on the spices and brewing. It’s often low in calories, making it a healthy substitute for sugary beverages such as hot cocoa or apple cider. Other benefits may include:

The cinnamon in chai tea may prevent hypertension, especially in people with diabetes. Research also indicates that people who drink several cups of black tea every day lower their blood pressure by several points.

The black tea and spices found in chai can significantly benefit both short-term and long-term cognitive function. Research reveals that the mere smell of cinnamon can improve both attention and memory. Black tea contains caffeine and the amino acid L-theanine linked to improved focus.

About Elephant Corridors and Migration

Fifty percent of the sales of all Elephant Approved® products directly support the World Land Trust and Wildlife Trust of India. This includes several of our private label black tea blends and our double scoop tea measure. As a result, those funds go to restore corridors in southern India. Corridors are natural passageways for Asian Elephants. However, tea gardens and other agricultural activities have created fragmentation. Visit this link to learn more about the appeal.

Elephant corridors are linear, narrow, natural habitat links. Moreover, these corridors allow movement between secure habitats. They allow elephants to go undisturbed by humans. As a result, the corridors are essential to ensure their future with uninterrupted migration between key habitats.

About Asian Elephants and Habitat

Elephants are endangered. In addition, tea estates and other crops are a contributing factor. Approximately 37,000 wild Asian Elephants remain on our planet. India holds 60% of the population. Deforestation has caused fragmentation of elephant habitat. As a result, it has interrupted seasonal migration. Elephants cannot discern a tea garden from a forest. And this is where the trouble starts. 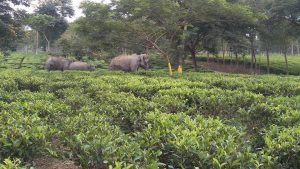 Elephants evoke fear. They trample tea gardens, destroy land and homes, and kill an average of 400 people a year. This is called Human-Elephant Conflict. The goal is to recover and restore the natural corridors.  As a result, elephants can safely move about without coming in contact with humans. Elephants die because of retaliation killings, including hunting, poisoning, trench trapping, and electrocuting. In addition, they struggle for food. They incur injury while crossing roadways.

Ensuring the Future of Asian Elephants

Elephant conservation is paramount for their survival. In other words. elephants are a keystone species.  This means that they play a serious role in the ecosystem. Their habits are necessary for the survival of flora and fauna. They spread seeds, produce fertilizer, prune trees, open tree canopies, and aerate the soil. They are highly intelligent with reasoning skills, emotions, empathy, sympathy.  And, they need our help.

Because of the trust, Asian Elephant safety through the corridor can now be secured. The Mudahalli corridor is of vital importance for elephants and other migrating mammals. This includes Bengal Tigers as they attempt to travel between the Ghats mountain ranges for food or mates. The funding is for the land exchange. As a result, the landowner can continue farming away from elephant passages. In other words, this situation is ends-up being a win-win.