This post is rather long.  However, it just has a wonderful story on the power of reconnecting with our guests at the Welsh Hills Inn.  Hopefully, you’ll find that it’s worth the read and the story behind it!

Granville and the idyllic Welsh Hills countryside that surrounds The Inn are so rich in history. In 2012, just two years after opening the Welsh Hills Inn, we had guests who came to celebrate their anniversary. Until just a few days ago, after reconnecting with so many past guests with our new “Inn the News” May 2020 newsletter, Bob contacted us.  He told us about an amazing project that he undertook.  It began shortly after visiting The Inn as our guests that year. That  inspiration became a project called “Barns in Paintings and Essays”. It would take him on an adventure throughout all 88 of Ohio’s counties. And it all came about as a result of their getaway to the Welsh Hills Inn and Granville.

As Bob tells the story, as he and his wife, Laura, turned down Cambria Mill Road towards The Inn.  He immediately noticed the little gray barn sitting on the corner, its roof sagging and boards missing. It sent him a strong message to paint it and write about it, which he did. Eventually, he visited every county to preserve history through at least one old barn painting and an essay about it. In May 2021, it culminates in an all-Ohio exhibit-fundraiser. It will be held at the beautiful, historic Muhlhauser Barn of West Chester, Butler County. By early 2021, all paintings and essays will be in a book published by Arcadia Press.

You can find more information about Bob’s project and see all of his paintings and essays by going to barnart.weebly.com

Many of you have passed that first barn when you turn onto Cambria Mill Road towards the Welsh Hills Inn.  You’ll find it pictured below.  Alongside that photo is Bob Kroeger’s painting. Here’s his story and history behind that wonderful, sagging old barn.

In September, 2012, my wife Laura surprised me, on our annual anniversary weekend, with a stay as guests at the Welsh Hills Inn, a B&B outside of Granville in Licking County. When we turned off Route 661, the main road in this area, I noticed this barn. It seemed to be begging to have its history preserved. Its gray timbers had tilted from the weight of the roof, which was also buckling under the strain of approaching two hundred years. The barn’s southern side had suffered the most.  It had a missing window and several planks gone.  Many others were warped. It reeked of character. And, somewhat mysteriously or even mystically, it reached inside me, awakening my inner artist. Paint me. Don’t forget me. Write about me, it seemed to say. So I returned the next day. 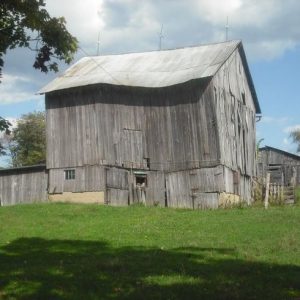 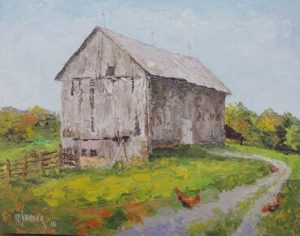 I knocked on the only door on the tiny farmhouse and was greeted by the farm’s owner, an elderly Mr. Herbert Hall. Clad in comfortable Saturday afternoon clothes and barefoot, he was defensive at first. After all, I was a stranger. But he warmed when I told him my idea. Then he let the history flow. Mr. Hall explained that the barn was probably built at the same time as this little farmhouse – about 1830 – by a family named Blanchard. And, what’s more, this area was originally called Blanchardville. Sure enough, an 1866 plat map in Granville’s History Museum shows several plots belonging to the Blanchards. Mr. Hall said they owned 500 acres. A gunshop was across the street. He pointed out that the beams supporting the roof were only half-cut trees, another indication of its age. The rest of the barn’s timbers are all hand-hewn.

Mr. Hall, in his 70s, has owned the farm since 1967 and, besides having a small herd of dairy cows, raises hay in the pasture. His grandfather came to Licking County in 1905 and started farming, eventually moving to the present location. He told me that many of these plots were awarded to Civil War veterans. Perhaps soldiers of the Ohio companies owned this land at one time.

Centuries before Ohio rallied troops for this bloody war, Native Americans lived here, off and on, here and there – and left behind their mark – many mounds, notably Granville’s Alligator Effigy Mound, as well as numerous ones in nearby Newark. This was their land, though they couldn’t stop “progress” and yielded to the organized armies of the young United States. After General Wayne’s victory over the Ohio Indian tribes in northwest Ohio in 1794, the flood gates opened: Ohio was finally safe and the land was cheap.

The first white settlers here had Welsh ancestry. After failing to survive on rocky ground in Cambria, Massachusetts, they arrived on these hills, fertile enough to grow crops, around 1800. Hence the names, the Welsh Hills Inn B&B and Cambria Mill Road. A few years later, colonists from Granby, Connecticut, and from Granville, Massachusetts, followed their Welsh neighbors. They paid $48,000 for land and built the town of Granville, one of Ohio’s first planned communities. It was a thriving place for 30 years – farming, tanneries, distilleries (the Puritans must have closed their eyes), iron making, and mills – until the town was bypassed by the National Road and the Ohio and Erie Canal. Rather than folding, Granville changed direction: education followed and Denison University, founded in 1831, is the town’s bright spot.

Veterans of the American Revolution are buried in the old town cemetery and over 100 houses and buildings are listed on the National Register of Historic Places. Granville is a good place to visit, if you’re into history.

In 2015, I visited again and gave Mr. Hall a small study painting, expressing my gratitude for his history lesson and permission to include his barn in this project. I returned again to “Granville Gray” in the summer of 2016, gave them another painting, and got barn wood for the picture frame. Finally, I had the chance to go inside the barn. On the lower level I noticed large hand-hewn beams and some half-cut logs, always an indication of early 19th century barn buildings.

But the real surprise came when we walked around the barn and up the hill. It’s a true bank barn, built into a natural hillside.  I looked inside on the upper level. What an incredible sight! Logs support the entire roof – the first barn roof I’ve seen like this. As Mr. Hall noted, the barn was built before the Civil War.  Someone felled nearby trees, carving them for the massive internal beams and using whole logs for the roof, not worrying about what the inside of the roof would look like. That farmer didn’t want to waste time!

Further up the hill sits an old corn crib, though it’s more a small corn barn than a crib, its wood weathered by centuries of wind and snow, and further down is another old gray wooden building, a chicken coop. This must have been a busy place in the 1800s:  chickens running around, corn in the fields, and livestock grazing. “Granville Gray” will always be one of my favorite old Ohio barns.